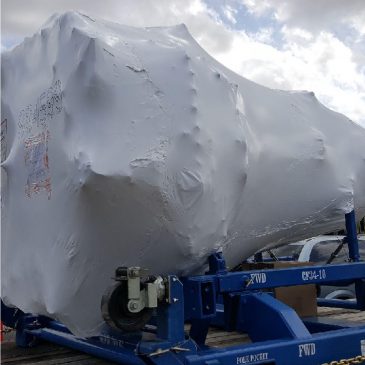 When the flag carrier of Ecuador suddenly needed to get their hands on a spare $6 million engine, naturally they called Prime Air & Ocean Cargo.

Tame had a pesky AOG situation on their hands – an Embraer 190 sitting idle on the ramp at their base of operations in Quito. Time is money for airlines – big money. They had to get one to get their General Electric CFM34 engines moved from Miami to Mariscal Sucre International Airport swiftly, safely, and the right way.

There’s no margin for error in this business.

Prime Air & Ocean Cargo has been handling parts shipments for the carrier for years, so everything moved smoothly, of course. But whether it’s a single part or a several thousand-pound jet engine, it’s always urgent.

“Time is of the essence, but they know they can depend on us for shipments big and small,” said Prime Group Omar Zambrano.

As soon as they got the green light, the engine was immediately transported from the supplier to Prime Air & Ocean Cargo’s facility just west of MIA via a special air-ride suspension truck to avoid any impact damage. Here, the Prime Air & Ocean Cargo Operations team made sure it was in good condition and ready to ship out with all the proper haz-mat documentation and labeling in place.

“Airlines are going to have maintenance issues from time to time. It’s the nature of the business,” says Zambrano. “But these matters have to be rectified fast, because the ripple effect caused by an AOG or other delays can be crippling to a carrier’s entire operation.