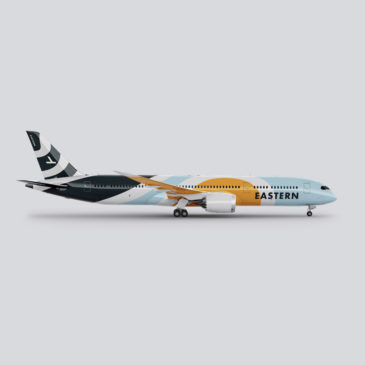 Big news in the airline industry is the resurgence of Eastern Airlines – and it’s big news for the Prime Group, too.

Dedicated to honoring the tradition of Eastern Airlines, the management team overseeing the comeback of this legendary brand has been busy planning for a long time. And now it’s gears up, as they just launched scheduled service between New York and Guayaquil, Ecuador.

During its heyday, Eastern Airlines was one of the original ”big four” domestic U.S. carriers, before folding in 1991. But in January 2002, it returned (again) to the skies, beginning with a route to Aeropuerto Internacional José Joaquín De Olmedo (GYE) out of New York’s JFK. It is also set to serve Georgetown, Guyana; and Jinan, China, flying extended-range Boeing 767s.

On their website, they state they are committed to getting it right this time, because their attention to detail “is focused on the tiniest mechanical check and even the cobalt blue stitching on Seat 17B.”

Eastern Checks In
Perhaps then it’s no coincidence that, when it came to attaining full-service cargo support on the ground in Guayaquil, the new Eastern checked in first with PrimeAir, Ecuador’s most established GSSA (General Sales & Service Agent).

“This is very good news for us,” says Prime Group CEO Roger Paredes. “With our significant presence in New York, this will provide even greater capacity into JFK, allowing us to further expand our business in New York, as well.”

The GSSA agreement with Eastern Airlines was signed in late January in time to begin cargo service on Feb. 1. PrimeAir is one of four Prime Group companies that include Prime Logistics, Prime Fresh Handling, and Prime Fresh Products – all of which operate throughout the U.S., Ecuador, Colombia and Europe.

PrimeAir is looking forward to filling the widebody bellies of Eastern’s once-weekly passenger flights with such specialized cargo as fish from coast of Ecuador, tropical fruits, and of course flowers from Quito and Cuenca.

And with Eastern’s strategy of continuing to open up flights to other underserved markets, it would appear the sky’s the limit for potential new growth – for both companies.

For nearly 20 years, PrimeAir has been providing the GSSA services in Latin America for some of the biggest players in air cargo – such as Atlas Air and Emirates SkyCargo, just to name a few. In fact, Ecuador is PrimeAir’s historic base of operations, where it all started in 2001.

What We Do Best
Closely supervising the action on the ground in Ecuador, PrimeAir’s team there has decades of experience handling perishables that make up a significant portion of the market. They benefit from being part of the Prime Group, a network of coordinated cargo and freight specialists with offices and representatives worldwide, in making cargo services, operations, handling, and accounting easy and reliable for airlines working across the globe.

Today’s Eastern Airlines is an entirely different company than the Eastern Air Lines of old. It is born out of a charter company called Dynamic Airways based outside of Philadelphia, in Wayne, Pa.

The carrier currently has eight aircraft, all of which are various models of the Boeing 767. The new livery is a unique design inspired by the local colors and geography of the destinations they will serve.

With a new slogan of “Go Eastern,” PrimeAir is ready to go along for the ride!