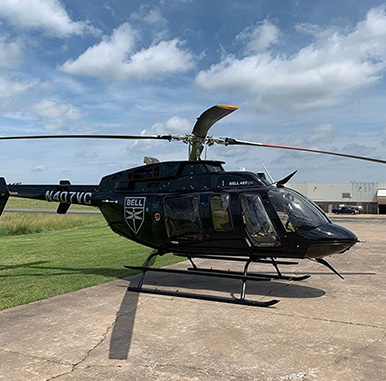 When it comes to handling high-value, oversized cargo there is no margin for error. Especially when it’s a large commercial turbine engine – or an entire helicopter.

As Atlas Air’s general sales and service agent (GSSA) in Bogota, PrimeAir’s expert team on the ground knows well that working with such major payloads is no small task. It is a specialized skill that requires years of experience and knowledge of the critical nature of the cargo.

PrimeAir benefits from being part of Miami-based Prime Group Companies, a global logistics conglomerate with 20 years of experience in working with such heavy and oversized items. Ensuring the safe and reliable handling of aerospace equipment is just one of many services they provide as the GSSA for Atlas Air, but it certainly ranks among the highest in importance.

With a price tag for one single engine exceeding $20 million, and $3 million for a new rotorcraft off the line, it is critical that the operation goes perfectly.

Last month, Atlas Air was contracted to transport a 13-ton General Electric LM6000 engine from Los Angeles to Bogota (BOG), where PrimeAir’s crew would offload it. A gas-turbine derivative of the CF6 engine family that’s been the cornerstone of the widebody aircraft business, this particular version is used for marine propulsion of cruise ships and fast ferries… A big engine with big work ahead.

Upon arrival at BOG, the PrimeAir team used a ramp-side crane to delicately move the 26,000 lb. behemoth to a nearby trucking area where a wheeled flatbed trailer took over, by providing final delivery to the customer’s warehouse.

“Special cargo like this needs definitely gets special attention,” said José Luis Vargas, PrimeAir’s Commercial Manager at BOG. In fact, both the engine and the helicopter that was delivered in a separate operation were designated Dangerous Goods (DG). This meant that expert handlers were required at each of the points of origin to carefully inspect the outbound shipments to ensure their acceptance and transport on Atlas Air aircraft.

Point of origin of the helicopter was YQB, the Canadian airport serving Québec City – not far from where Bell manufactured this Bell 407 GXi rotorcraft destined for Colombia.

With a chargeable weight of approximately 10 tons, the seven-seat four-blade helicopter was disassembled for transport and shipped BOG where it was accepted ramp-side by PrimeAir. Once off the Atlas Air freighter, the payload was transported using a normal dolly to a trucking area for the continuation of its journey to the customer.

“Our customers know we’re the go-to experts for big logistics challenges like these. That’s because we’ve been doing specialized heavy-cargo work for decades – and not just for the aerospace industry. We also manage logistics for the transport of oil-industry equipment, construction equipment, and automotive parts and equipment.”

One of the premier carriers in PrimeAir’s portfolio, Atlas Air is not only one of the most important and reliable cargo airlines in the world, it is the company’s longest lasting customer. PrimeAir also offers sales and marketing, cargo services, operations, handling, and accounting.

While PrimeAir has been Atlas Air’s designated agent in BOG for three and a half years, the relationship between the two companies began 20 years ago, in support of Atlas Air’s freighter operations between Quito and Miami, which continues today.