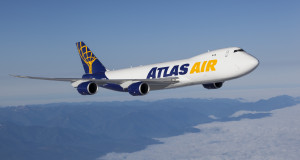 PrimeAir recently celebrated its second year of direct operations with Atlas Air in Bogota, with six frequencies per week between BOG and MIA.

One of the premier carriers in PrimeAir’s portfolio, Atlas Air is not only one of the most important and reliable cargo airlines in the world, it is the company’s longest lasting customer.

When Prime Group’s founding company started operations in 2001, the first flight they ever serviced was between Quito and Miami – an Atlas Air 747 freighter, full of flowers, of course.

All these years later, says Commercial Manager for Colombia José Luis Vargas, “We are still boasting about our GSA relationship with Atlas Air, because they truly epitomize what a professionally run and reliability air carrier operation should be.”

Due to the fact that Atlas Air is a top choice among shippers and freight forwarders worldwide, Vargas continued, “In turn, we are considered to have the best service and the best integrity in the markets where we represent Atlas Air.”

As one of four companies that comprise the Prime Group, today, it is PrimeAir that represents and services Atlas Air’s cargo operation in Colombia and Ecuador.

The Story of Atlas

So let’s get on board with what Atlas Air is all about – by starting in the beginning.

The word Atlas comes from the Titan god in Greek mythology that bore the sky aloft. He personified the quality of endurance because he carried the heavens upon his shoulders.

Flash forward about 2,700 years to the early 1990s, when Atlas Air founder Michael Chowdry saw an opportunity in the air cargo sector and founded his company. He began by leasing freighter aircraft to other airlines on an aircraft-, crew-, maintenance-, and insurance-contract basis (ACMI). Operations began with one aircraft, a Boeing 747-200.

Today, Atlas Air is setting higher standards for value and excellence by providing a wide range of long- and short-term cargo and passenger solutions, from shipping precious perishables and heavy construction equipment, to arranging passenger charters for celebrities or dignitaries.

Specifically, along its cargo spectrum of services, shippers, freight forwarders, manufacturers, sporting groups, and other organizations rely on Atlas Air to safely, efficiently, and cost-effectively carry their commercial cargo.

The demands of globalization require freight and passenger charter solutions from a company with the aircraft, technology, and infrastructure that helps its customers create their own global footprint.

Atlas Air has all this and more – including the traffic rights, regulatory expertise, in-country sales, and support and a 24-hour global control center needed to expand their customer operations.

In February 2001, Atlas Air Worldwide formed its current holding company structure with Atlas Air as a wholly owned subsidiary. Other subsidiaries include:

For the past several years, Atlas was voted “Leasing Provider of the Year” in an industry survey by the Payload Asia magazine. The survey added Atlas as “Charter Operator of the Year,” as well.

In May 2016, Atlas announced a strategic, long-term relationship with Amazon to provide and operate 20 Boeing 767-300 converted freighters in support of the continuing expansion of Amazon’s e-commerce business and the enhancement of its customer delivery capabilities.

Today, Atlas Air Worldwide is the leading global provider of outsourced aircraft and aviation operating services. They are proud to be the world’s largest operator of B747 freighter aircraft and the only outsource provider of Boeing’s 747-8F.

They are also proud to provide customers the broadest array of B747, 777, 767, 757 and 737 freighter and passenger aircraft for domestic, regional, and international ACMI, CMI, charter, and dry lease applications.

For information about Atlas Air, visit www.atlasair.com e-mail info@atlastair.com, or call or call 914-701-8000.