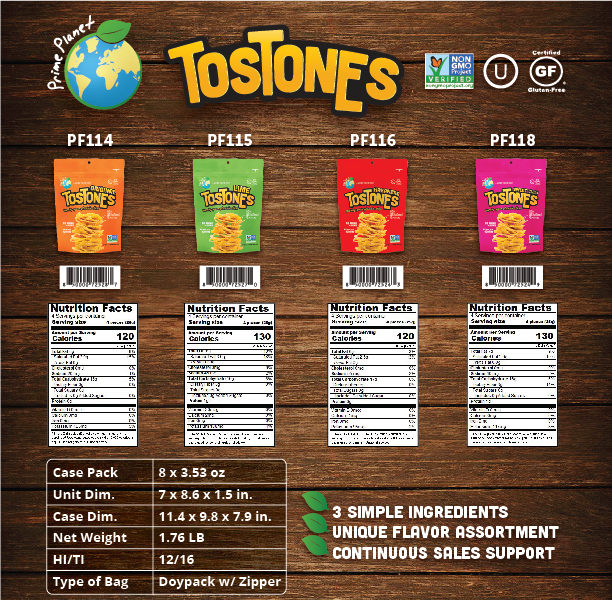 Prime Fresh Products’ line of tropical vegetable snacks is taking off with the introduction of healthy and delicious Prime Planet Parsnip and Cassava Chips.

Up to this point, the company has primarily been focusing on its flagship product, Prime Planet Tostones, a crunchy green plantain chip that Marcia Tipiana says is the best in the market. Tipiana is Operations Coordinator for Prime Fresh Products, based in Doral, Fla..

“We are number one in quality and taste because our Tostones are processed naturally under the highest quality standards, and because they’re a delicious alternative to other typical snack chips in the market,” she says. “Our Tostones are also very popular because they appeal to a growing number of consumers who are nutrition conscious.”

With the Tostones serving as an irresistible entree to the healthy-snacking market, Prime Planet is now doubling down by launching chips created from cassava and parsnip, two vegetables that have many health benefits.

“We believed we could make parsnip and cassava more appealing to our customers by using the minimum quantity of salt and vegetable oil – and the end result is a unique and new delicious snack option,” said Tipiana.

As with the Tostones, vegetable chips are part of growing trend among consumers who want to lead a wellness-oriented lifestyle. Prime Planet products are gluten free, Kosher with no sugars added, and can be part of a balanced healthy diet as well.

“Consumers are more health conscious these days, which is why we intentionally market our products as ‘better-for you’ snacks. With such new options in the marketplace, people don’t have to try to snack less, just better – and Prime Planet is well positioned to help meet this emerging demand,” says Tipiana.

One of Prime Planet’s core values is something called, “ethical supply sourcing,” where they are very selective in picking their chip ingredients and product suppliers. And with South America being a major plantain producer, at the moment the company is primarily sourcing its product from there.

“Our suppliers must follow certain standards such as having a HACPP program (Hazard Analysis & Critical Control Points Plan), be Kosher certified, and have other quality controls in place,” said Tipiana.

In addition to ensuring top quality, Prime Fresh Products also wants its customers to know they are being truthful every step of the way.

For instance, she says they do not label their Tostones as “healthy,” rather, they are described as a better option than traditional snack chips.

“Consumers love our honesty and the fact that we do everything we can to make our products as natural as possible. At the same time, our chips taste great, they come in awesome packaging, and they’re looked upon as something different for a change. It’s a win-win for everyone,” she added.

So where do consumers find Prime Planet Tropical Vegetable Snacks? Right now, at Publix Supermarkets throughout South Florida. But over the next couple years, Tipiana says the trajectory is for Tostones to be available nationwide.

Prime Planet is also getting ready to blast off with a new slogan, “A Natural World of Flavor,” driving home the point that by using simple yet innovative ingredients, snacking can be incorporated in a balanced diet without depriving yourself from the tastiest flavors in our planet.

Stay tuned. The Prime Planet journey has only just begun.